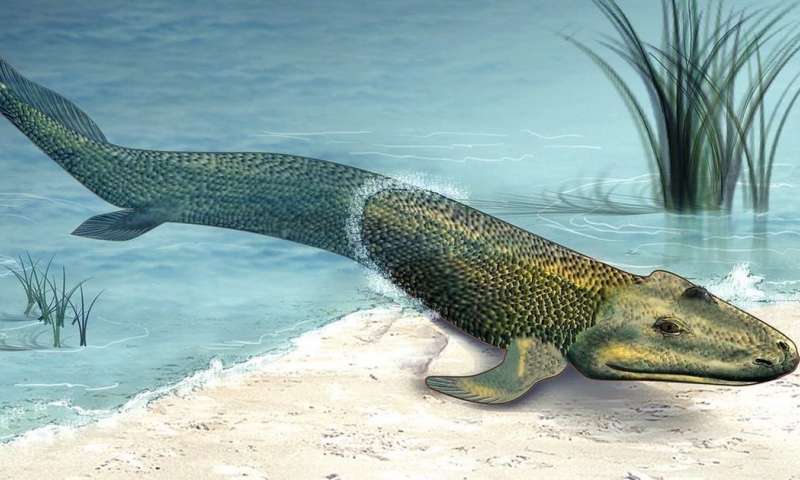 A group of scientists has discovered the remains of an ancient tetrapod that may have never come out of water. The well-preserved fossils of the ancient creatures were excavated from Russia. The researchers found the bones of the creature near a site called Sosnogorsk Formation which is located near the city of Ukhta in the Komi Republic of European Russia.

The fossils belong to an ancient four-legged vertebrate creature called by scientists as Parmastega aelidae. The creature belongs to the group called tetrapod who during the course of evolution first started inhabiting the land, leaving their water habitats. Most of the present-day amphibians, reptiles, birds and mammals have tetrapods as their ancestors.

The fossils which are estimated to date back to about 372 million years ago belong to a creature that resembled our modern crocodiles. The group of researchers, who published their findings in the journal Nature, suggest that these creatures would have in fact never left the water. The group of researchers suggests that these could be one of the earliest specimens of tetrapods belonging from the Devonian period.

The creatures bear a lot of characteristics similar to fish, like the lateral line canals that helped them judge any vibration in the water. Parmastegas, which had a curved snout and a set of large teeth, mostly hunted for animals near the edge of the water bodies. The creature’s eyes that were situated at the top of their skull helped it remain underwater while scanning the banks of the water bodies for potential prey.

Another prominent reason for the scientists to believe that these earliest tetrapods never left the water is the lack of well-preserved vertebral column and limbs. The researchers suggest that this could be because they were made of cartilages, pointing to the fact that the Parmastega didn’t ever completely leave the water.